FOOSH stands for “fall on outstretched hand,” and it is something we have all done at one point or another, some of us more often or harder than others. FOOSH is what we call a mechanism of injury, or MOI. This MOI is responsible for a wide variety of injuries, including fractures, sprains, and strains. The following are some of the most common injuries sustained by kids who FOOSH.

Kids and adolescents have growing bones, which makes them susceptible to certain injuries that would never happen in adults with mature bones. Kids’ bones are relatively soft and malleable, which makes them susceptible to something called torus fractures. It is common for a kid to FOOSH and compress one or both bones of the forearm, resulting in a buckling of the bone; this is what we call a torus fracture or buckle fracture. Because the bone does not really crack open per se, torus fractures are relatively stable and not likely to result in deformity. Treatment is usually a cast for five to six weeks and X-rays to assess fracture healing thereafter.

White arrows are pointing to a classic torus fracture.

Kids and adolescents have open growth plates, which are areas where bone growth is occurring, usually toward the end of long bones. On X-ray, these growth plates, also called physis, appear to be thin gaps in the bone but are actually fibrous connections that have not turned into mature bone yet. Growth plates are not as dense as mature bone and are therefore susceptible to injury. We call injury to the growth plates Salter-Harris injuries, of which there are five types to describe the pattern and degree of severity. It is very common to FOOSH and have a minor injury to the growth plate at the end of the radius but not necessarily see a large amount of swelling or changes on an X-ray. Some Salter-Harris injuries are more obvious and can be severe. More often than not, Salter-Harris injuries are relatively minor and can be treated with a cast or even a splint/brace.

White arrow points to a crack on the radius going into the growth plate, a Salter-Harris 2 fracture. This type needs a cast.

The FOOSH mechanism can cause injuries further up the arm. Sometimes, kids fall on an outstretched hand, and the force of the fall goes through the hand, wrist, and forearm and into the elbow, causing an elbow injury. One of the more common injuries in kids is called a supracondylar fracture, a crack in the humerus bone just above the elbow. These usually cause a large amount of elbow swelling and often times do not show a definitive crack on the first X-ray. However, this type of injury is so common that we often treat painful swollen elbows after a FOOSH with cast immobilization even without seeing a definitive crack on the X-ray.

Red arrows are pointing to the characteristic swelling of an elbow joint with a supracondylar fracture. Sometimes, we don’t see the crack on this lateral view. 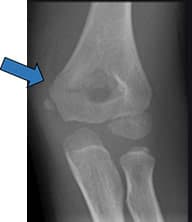 Blue arrow is pointing to a subtle supracondylar fracture. This point is not severe and just needs a few weeks in a cast.

When you look at an X-ray of the wrist, there are a bunch of tiny little bones that seem to fit together like a bunch of puzzle pieces. There is one little bone in particular toward the base of the thumb that is commonly injured by a FOOSH mechanism. This little bone is called the scaphoid and can sometimes be tricky to handle when injured. The scaphoid looks like a peanut with a narrow section in the middle called the waist. Injury to the scaphoid usually occurs at the waist or at the end further away from the wrist, closer to the thumb. Blood supply to these areas is a little bit better than blood supply to the area at the bottom of the scaphoid, close to the wrist. Scaphoid fractures are tricky to handle simply because scaphoid healing is relatively slow and usually requires a cast for six to eight weeks.

White arrow is pointing to a small crack on the scaphoid. This one is nondisplaced and in a good area on the bone that gets good blood supply. It will likely heal just with cast immobilization.